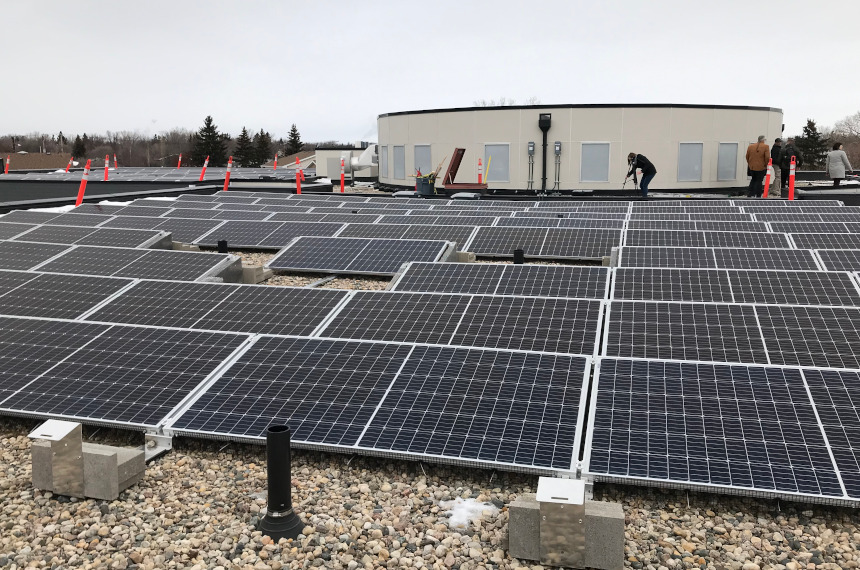 The project was launched on Wednesday.

The roof of the affordable housing complex for Indigenous seniors and elders is covered in 230 large black solar panels, which are set up to help offset some of the energy costs in the building’s common areas.

The building is owned by Silver Sage Holdings, as are the other affordable housing buildings which will comprise the rest of the project. The total panel count for the project is 294.

The company launched the project with an event in the lodge’s main common area. Company president and CEO Maynard Sonntag said he’s really excited to have the work come to fruition.

“The name of the place being pîsimokamik — which means ‘sun lodge’ — it’s just so fitting that we would have solar panels on a sun lodge,” said Sonntag.

The lodge opened in 2015. Sonntag said officials thought about panels at the beginning, but it wasn’t until people had been living there for about a year that the company decided to take a serious look at solar panels.

Sonntag said the main driver of the project was financial — he pointed to the fans in the common area and commented that it eats up a lot of power to keep them going — but he said in the end it’s not the only reason the project worked.

“Our organization and the culture of First Nations people really is about the land and the sun and the water, and so culturally it fits very well for our organization. It’s something we talked about a lot when we thought about putting the project together,” said Sonntag.

The whole project cost upwards of $300,000 but part of that was offset by a $25,000 donation from MiEnergy’s MiCommunity fund. MiEnergy is the company that engineered, designed and installed the whole project.

Nathan Jones, a solar energy adviser with MiEnergy, explained that the project qualified because it involves housing elders and helping out people with low incomes.

“In projects like this, basically instead of spending money on power you’re able to put money back into the organizations and folks that you support. So there’s a whole other community aspect to this project that is quite unique,” said Jones.

The project is expected to offset between 3,000 and 4,000 metric tonnes of carbon over its 30-year lifespan.

The cost of the project is also offset by its qualification under the old net metering program, which included grants for the panels and a 1:1 credit for power fed back into the grid.

Sonntag said that’s one of the reasons the project was so attractive and he admitted that, under the new solar program, the company isn’t looking at doing any more projects like this.

The panels on top of the lodge just need to be inspected and then they’ll be ready to plug into the grid. The other two parts of the project still need to be built.

It’s easier than ever for Canadian homes to go solar

Did you know that 18% of Canada’s greenhouse gas emissions come from buildings? The federal government is taking climate action by making it easier to invest in home energy efficiency projects. About 1,200 households and businesses in Saskatchewan are already using...

In the summer of 2017, MiEnergy was proud to partner with the Saskatchewan Environmental Society and deliver an innovative cooperative solar project in Saskatoon. Saskatoon company Montgomery Agencies Ltd. pursued the project for one of their north end buildings where...

In the spring of 2016, miEnergy installed a ground mount solar system for Saskatchewan acreage owner Henry Unger. Unger pursued a solar system for his property after digging into the financials. He wanted to find a way in which he could isolate himself from the rising...

In Winter 2018, miEnergy had the pleasure of sponsoring Phase 1 of the Optimist Hill campaign right here in Saskatoon. The campaign successfully brought to life the city’s first and only ski & snowboard hill. The campaign was 100% funded by the community, and...

For new or prospective solar customers, understanding solar power may seem overwhelming at first. Fortunately, you don’t need to be an expert on solar power to reduce energy consumption and save money with these innovative solutions. With that said, understanding some...

If you’re considering a solar or photovoltaic (PV) system for your home, you may wonder how much energy a solar array can generate on cloudy days. After all, solar panels need sunlight to generate energy. Overcast conditions can therefore affect a solar array’s...

Things to Consider Before Installing a Solar Energy System

Solar energy systems offer a wide variety of benefits that can make the decision to install a solar system at your home or business an easy one. There are, however, several things you should consider before installing a system. These considerations will help you...

The long-term financial benefits of using solar energy to power your home or business are significant. Who wouldn’t want to lock in at lower energy rates and do away with their energy bill once and for all? While many people are aware of the financial upside for solar...